January 2020 Episode of Solidarity Is This 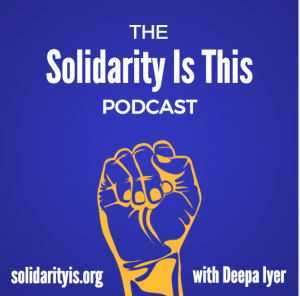 Not In Our Name, Resisting Hindu Fascism

If you are Hindu and want to speak up in #solidarity about the Indian government’s actions to suppress the rights of non-Hindu religious minorities through policy, clampdown of dissent, internet shutdowns, and police violence, here are 7 steps to take:

Reflect on Proximity to Privilege​: To be an ally, we must be clear about the access, benefits, and power we have garnered by our proximity to the Hindu caste hierarchy. Even if we may not subscribe to or participate in caste discrimination in our daily lives, we are nonetheless beneficiaries in a myriad of ways. To understand how the caste system pervades the lives of Hindus, especially upper caste Hindus, read ​this,​ ​this, ​and​ this​.

Own Privilege: ​After self-reflection and self-awareness, there is the opportunity to step into allyship. To do that, we must not hide our privilege. We can’t assume that people will assume that we don’t subscribe to a caste hierarchy. It’s important to state our privilege and proximity to the Hindu caste system, and to state our commitment to dismantling it. To understand why upper caste Hindus must do this explicitly, read ​this​ and ​this.

Center Analysis and Values​: If you are reading this, you believe in equality, justice, self-determination, and liberation for all peoples. To develop a political and social analysis that is based in these values, it is important to understand the needs, ideas, and requests of those directly affected. Learn about the requests of Dalit, Bahujan, Adivasi communities, of Muslims, Sikhs, and Christians, and of Kashmiris. Learn about the Kashmiri struggle, which has been ongoing for decades. Though many Kashmiris have joined the recent protests in India and across the world, their struggle is in their own words different and more about self-determination and independence from India itself. and about Kashmir here. Be careful not to flatten different struggles.

You can find starting points about CAA ​here​ and ​here​ and about Kashmir ​here​. ​South Asian Reads​ has compiled a list of resources around the CAA and NRC ​here.

Take a Stance​: A community-informed analysis informs the declarations to end Hindu fascism, to dismantle the caste hierarchy, to call for self-determination for Kashmir. It’s important to remember that as allies, there isn’t room to equivocate about the analysis – ie. to sugarcoat what’s happening in India with soft language, to use excuses such as “this is a political issue happening in India and has no impact here” or to look at both sides of the issue. If you’re still unclear about the threat of Hindu fascism in India, read ​this​ and ​this.​ If you want to learn about the long arm of Hindu fascism here in the US, read this, ​this​ and ​this.

Find Your Lane​: To be an ally, we have to get comfortable with a lane on the proverbial social justice highway. We follow the lead of those affected and don’t “overtake” them. We call in the people in our lane who might be veering off course. We influence bystanders and fence-sitters who are idling on the side of the highway – and urge them to get into our lane.

Take Action​: Being an ally requires us to take risks with our reputations (perhaps people won’t like us or think we are taking sides) and our relationships (perhaps people will unfriend us or stop talking to us). But there are many people who are on the same path that you are. Find them and work together.

Here are ways to take action:

Show up again and again​: To be a strong ally, we have to be consistent with our voice and our presence. It’s natural to feel tired or numb at times. During those moments, listen to your body and mind to give yourself the break you deserve and park your vehicle on the side of the highway. Trust that there are others who will be moving along, and that you can catch up when you are able.

LISTEN TO THE NEXT

SOLIDARITY IS THIS EPISODE

UP NEXT
Manage Cookie Consent
To provide the best experiences, we use technologies like cookies to store and/or access device information. Consenting to these technologies will allow us to process data such as browsing behavior or unique IDs on this site. Not consenting or withdrawing consent, may adversely affect certain features and functions.
Manage options Manage services Manage vendors Read more about these purposes
View preferences
{title} {title} {title}